Dirk and the 4cats Cuddly Cushion

* Originally written by me for katzenworld.co.uk

I always like to think I know what type of toys my cat Dirk will love and which ones he doesn’t care about. When I saw the Cuddly Cushion from 4Cats I thought it was perhaps more for kittens. I could just picture them grabbing the cushion and then holding it with their front legs while kicking it with their hind legs. You can probably picture it as well!

Of course there’s catnip in the cushion, which Dirk loves! But I thought once he’d had his catnip fix that would be the end of it…. Well let me tell you upfront that I was wrong: Dirk loves this cushion! I’ll let Dirk and the pictures speak for themselves.

Silly mom…. how could she have thought this …. was for kittens only?! And how could she now know what it’s for?! The clue is in the name: it is a Cuddly Cushion!

I always get so excited when she calls me and says she has a surprise for me. The sound of the crinkling plastic as she unwrapped the new toy, I couldn’t wait to find out what it was. 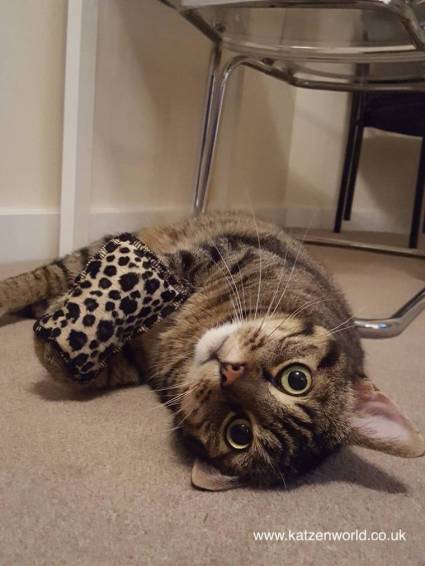 I had a good sniff first and then rubbed my head against it, and let me tell you it is sooooo soft! And it smells good 😉 But it’s really not just about the catnip (and coming from a catnip addict like me, this is saying a lot!)

OK, maybe some of this has to do with the catnip…

But that’s really not all. I love that it is so very soft. You can cuddle with it or just rest your head on it when you’re a bit tired from playing or just having a lazy day (that’s pretty rare, I know, I’m always super busy). I really love mine!

In all honesty, I do sometimes like to throw my Cuddly Cushion in the air and then chase it and when mom isn’t looking I also sometimes give it a good kick, but don’t tell her 😉

So, time to relax, because I am a little tired now. Luckily I have my friend… But before I go don’t forget that you can get this toy on the Katzenworld online shop.