Dirk chasing yet another fake rodent

* Originally written by me for katzenworld.co.uk

Dirk and I previously reviewed Frolicat’s Cheese toy which Dirk loves playing with. This time Dirk and I played with Frolicat’s Rolorat: a robotic rat.

This toy will appeal to cats that are triggered by chasing laser lights and cats that enjoy playing with moving toys will also like this. When you switch the rat on its eyes light up and the tail starts moving. Then the rat starts rolling around the room occasionally stopping to move the tail and flicker the light in its eyes.

Dirk was properly intrigued by this moving toy though he mainly stuck to observing it when it was switched on. He’s not keen on laser light toys so that didn’t trigger him to play with it. He kept a close eye on it though! As soon as I switch it off he starts playing with it. 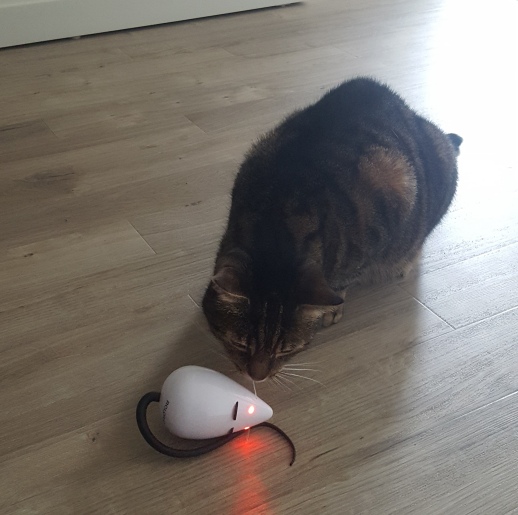 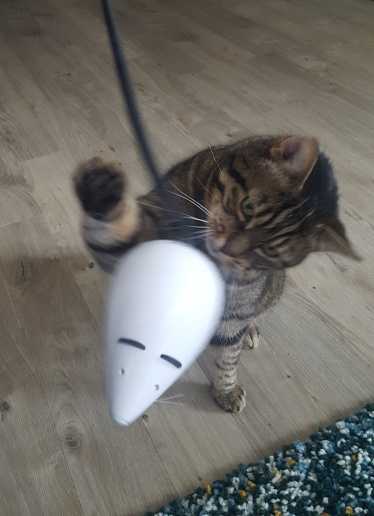 I guess kittens will love chasing this toy around the room when it is switched on. More mature cats, like Dirk, might play with it more when it is off. Dirk quite likes kicking it, jumping on top of it from a hidden position and pouncing or biting the tail.

An unintended game that Dirk enjoys as well is when I hold the rat up by its tail – it has a pretty long tail – and swing it around or drag it across the floor. He’s always up for a game of chase!

Kitten owners: I definitely recommend this one! It will provide hours of entertainment for you and your kitty 🙂